2. The first film of India Screened at which Place?

d. All of these

6. Who is the Director of the Lagaan?

10. In which year India’s first talkie film was released?

11. First Sanskrit film of India was?

12. Which was the first English film of India?

13. At which place India’s first Film Festival was held?

14. Among the following which was the first Malayalam movie won the President’s gold medal for the best film?

15. The first short film of India Flower of Persia directed by whom?

Top 10 Educational Institutes in all categories

This is probably the digital camera you picture in your head when you think of a digital camera. Overall, they are extremely versatile and perform well in almost all situations.

Entry-level DSLRs are usually sold packaged with a lens and cost between $400 and $600.  High-end DSLRs retail for $1500 and up (and are often sold without a lens).

A newer type of digital camera that is continually growing in popularity is the mirrorless system. A mirrorless camera usually gives you all the same capabilities and features as a DSLR, but in a slightly smaller package.They are very quiet—there is no loud “click-click!” when you snap a photo. This makes them popular with street photographers, who want to remain silent and invisible to their subjects in order to capture candid scenes.

Mirrorless cameras vary greatly in price, from as little as $350 to as much as $2000, depending on the brand, model, and whether or not a lens is included. 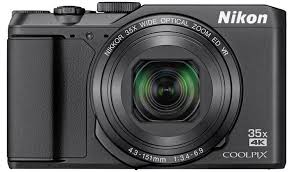 Compact cameras are our final category, and they are just that—small and compact! They may also be called “point-and-shoot” cameras.  Be warned—there are a million compact camera choices, and it can be difficult to distinguish which will offer you the quality you desire.

Compact cameras are declining in popularity, since many people use the cameras in their smartphones instead.  This is something to consider—if you buy a compact camera, will it be redundant if you already use your smartphone to photograph while on-the-go?

There is a large variety of compact cameras, price-wise.  However, most fall within the range of $200 to $500.  If you value small size and affordability above all else, and don’t mind potentially losing some control of your settings, this may be the right choice for you.

The lens is one of the most vital parts of a camera. The light enters through the lens, and this is where the photo process begins. Lenses can be either fixed permanently to the body or interchangeable. They can also vary in focal length, aperture, and other details.

The viewfinder can be found on all DSLRs and some models of digital compacts. On DSLRs, it will be the main visual source for image-taking, but many of today’s digital compacts have replaced the typical viewfinder with an LCD screen.

The body is the main portion of the camera, and bodies can be a number of different shapes and sizes. DSLRs tend to be larger bodied and a bit heavier, while there are other consumer cameras that are a conveniently smaller size and even able to fit into a pocket. 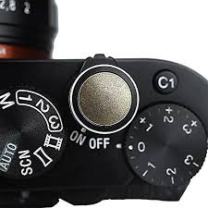 The shutter release button is the mechanism that “releases” the shutter and therefore enables the ability to capture the image. The length of time the shutter is left open or “exposed” is determined by the shutter speed. 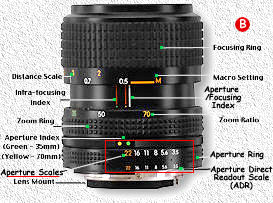 The aperture affects the image’s exposure by changing the diameter of the lens opening, which controls the amount of light reaching the image sensor. Some digital compacts will have a fixed aperture lens, but most of today’s compact cameras have at least a small aperture range. This range will be expressed in f/stops. For DSLRs, the lens will vary on f/stop limits, but it is usually easily defined by reading the side of the lens.  There will be a set of numbers stating the f/stop or f/stop range, ex: f/2.8 or f/3.5-5.6. This will be your lowest settings available with that lens.

The image sensor converts the optical image to an electronic signal, which is then sent to your memory card. There are two main types of image sensors that are used in most digital cameras: CMOS and CCD. Both forms of the sensor accomplish the same task, but each has a different method of performance.

The memory card stores all of the image information, and they range in size and speed capacity. The main types of memory cards available are CF and SD cards, and cameras vary on which type that they require. 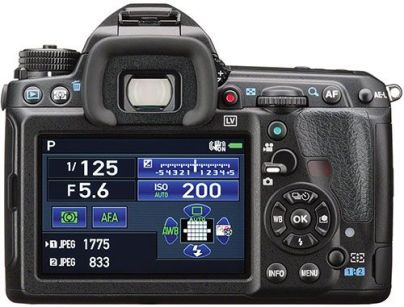 The LCD screen is found on the back of the body and can vary in size. On digital compact cameras, the LCD has typically begun to replace the viewfinder completely. On DSLRs, the LCD is mainly for viewing photos after shooting, but some cameras do have a “live mode” as well.

The on-board flash will be available on all cameras except some professional grade DSLRs. It can sometimes be useful to provide a bit of extra light during dim, low light situations.

The controls on each camera will vary depending on the model and type. Your basic digital compacts may only have auto settings that can be used for different environments, while a DSLR will have numerous controls for auto and manual shooting along with custom settings.

Let’s look at the basic moves that are used in every video and film production, from those used by your wedding videographers to those used by Spielberg himself. Our pictorial examples show a videographer using these moves with a hand-held technique, but they apply best to tripod and dolly use.

Tilt: Moving the camera’s lens up or down while keeping its horizontal axis constant. Nod your head up and down – this is tilting.

WHY DO THIS? Tilting is the fastest way to get from low to high, or the other way around, when you want to show two things, though not necessarily at the same time. You might start focused in on a hand holding a bloody knife and then tilt up to reveal … Macbeth! 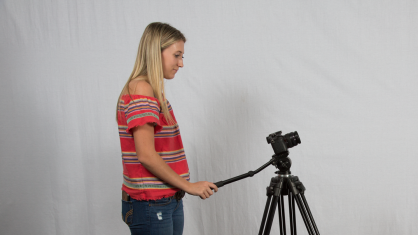 Pan: Moving the camera lens to one side or another. Look to your left, then look to your right — that’s panning.

WHY DO THIS? You might pan across the audience at a wedding to show all the people there. You might pan from one character to someone who walks through the door to elevate the tension that wouldn’t exist with a fast cut.

Zoom: Zooming is one camera move that most people are probably familiar with. It involves changing the focal length of the lens to make the subject appear closer or further away in the frame. Most video cameras today have built-in zoom features. Some have manual zooms as well, and many have several zoom speeds. Zooming is one of the most frequently-used camera moves and one of the most overused. Use it carefully.

WHY DO THIS? Zooming is the easiest way to get from far to close, or the other way around. You might start with a wide shot of a concert to set the stage and then zoom in to show one of the performers.

WHY DO THIS? When pedestaling, you usually want to maintain the camera to subject distance, so you might start on a person leaning up against a wall, and then pedistal up, and up, and up, and up until the camera gets to Spiderman, clinging to the fourth story of a building and creeping up it. Or, you might pedestal from a bride and groom’s hands up to their faces.

Dolly: This is a motion towards or motion from. The name comes from the old “dolly tracks” that used to be laid down for the heavy camera to move along — very much like railroad tracks — in the days before Steadicams got so popular. The phrase dolly-in means step towards the subject with the camera, while dolly-out means to step backwards with the camera, keeping the zoom the same. Zooming the camera changes the focal length of the lens, which can introduce wide-angle distortion or changes in the apparent depth of field. For this reason, it’s often preferable to dolly than zoom.

I won’t spoil it by telling you what happens, but the camera starts inside a house and then dollys backwards, down a staircase, out into a street, and then off into the city. What does this tell us? That while something extremely important happened, it’s just one story in a world of stories. Hitchcock’s shot, with a gigantic camera and a huge crew, frantically moving dolly tracks out of the shot as the camera moved backwards was groundbreaking in its day, but with today’s lightweight cameras it could be done by a single camera operator.

Truck: Trucking is like dollying, but it involves motion left or right. Truck left means “move the camera physically to the left while maintaining its perpendicular relationship.” This is not to be confused with a pan, where the camera remains firmly on its axis while the lens turns to one direction or the other. You might truck left to stay with a pedestrian as she walks down a street rather than using a pan, which would show her back after she passed the camera.

WHY DO THIS? You’d Truck if you want your camera to subject distance to stay the same. You might, for example, truck the camera parallel to a person walking down the street to keep them in the frame. Lots of trucking in movies is done from the window of an actual truck. So this isn’t a bad way to remember it. In the training montage in the 1976 Best Picture Academy Award Winner, Rocky, directed by John G. Avildsen, there’s a truck shot (from a truck) following the titular character along the waterfront as he runs. The trucking shot allows the viewer to stay with Rocky and see how fast he’s actually going. (He’s fast!)

The Three Point Lighting Technique is a standard method used in visual media such as video, film, still photography and computer-generated imagery. It is a simple but versatile system which forms the basis of most lighting. Once you understand three point lighting you are well on the way to understanding all lighting.

The technique uses three lights called the key light, fill light and back light. Naturally you will need three lights to utilise the technique fully, but the principles are still important even if you only use one or two lights. As a rule:

This is the main light. It is usually the strongest and has the most influence on the look of the scene. It is placed to one side of the camera/subject so that this side is well lit and the other side has some shadow.

This is the secondary light and is placed on the opposite side of the key light. It is used to fill the shadows created by the key. The fill will usually be softer and less bright than the key. To achieve this, you could move the light further away or use some spun. You might also want to set the fill light to more of a flood than the key.

The back light is placed behind the subject and lights it from the rear. Rather than providing direct lighting (like the key and fill), its purpose is to provide definition and subtle highlights around the subject’s outlines. This helps separate the subject from the background and provide a three-dimensional look.

Contrast ratio is of interest in two situations:

Three-point lightening is used in video production. The three lights are- Key, Fill and Back. 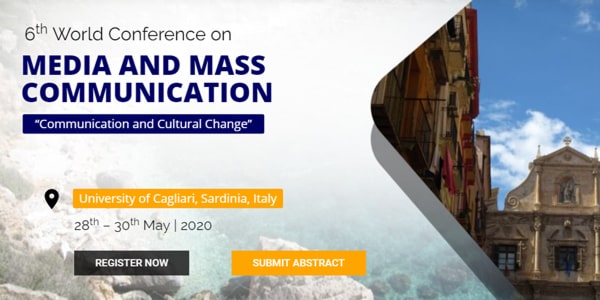 BASIC countries to play an important role in making Paris agreement accepted in letter and spirit by the World: Union Environment Minister